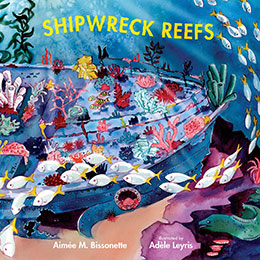 When ships sink to the ocean floor, the ocean transforms them into artificial reefs. This new life begins with the growth of coral polyps and the arrival of small plankton, followed by schools of fish and hungry predators, until the ship is home to hundreds of sea creatures. It’s a magical transformation from relic to reef that helps bring life back to struggling ocean ecosystems.

A peek inside the book

Adèle Leyris is a Franco-English illustrator based in London. Inspired by the shapes that nature offers, she spends a lot of time observing and drawing what she finds in the wild during her travels before working on her compositions. Learn more about Adèle.

”All over the world, ships sunk accidentally or purposefully have become shelters for marine life and frames for new coral reefs.  This colorful addition to the Imagine This! series came out of the writer’s encounter with sunken ships, tanks, and fighter planes around the island of Saipan in the western Pacific, relics from World War II now protected in an area that welcomes divers. After introducing the idea of reefs growing on sunken ships, Bissonette provides clear explanations of the formation and composition of coral reefs, how algae and coral work together, how the reefs become neighborhoods of varied fish species, and how they’re threatened by global climate change. She includes information about other artificial reefs, including those forming on retired oil and gas rigs and sunken subway cars. She points out that artificial reef construction in more northern latitudes can help keep coral growing in warming seas. Adding more reefs to the world can also help ease the pressures of fishing and tourism that endanger these fragile ecosystems. The exposition might be challenging for the audience but it’s straightforward and direct, supplemented with extra information in a smaller font and set on Leyris’ watery underwater scenes, mostly double-page spreads full of corals, sponges, tubeworms, anemones, barnacles, and fish. Like the text, they invite exploration of a watery ‘world of wonder.’ Dive in for a new angle on a popular topic.” (Kirkus Reviews)